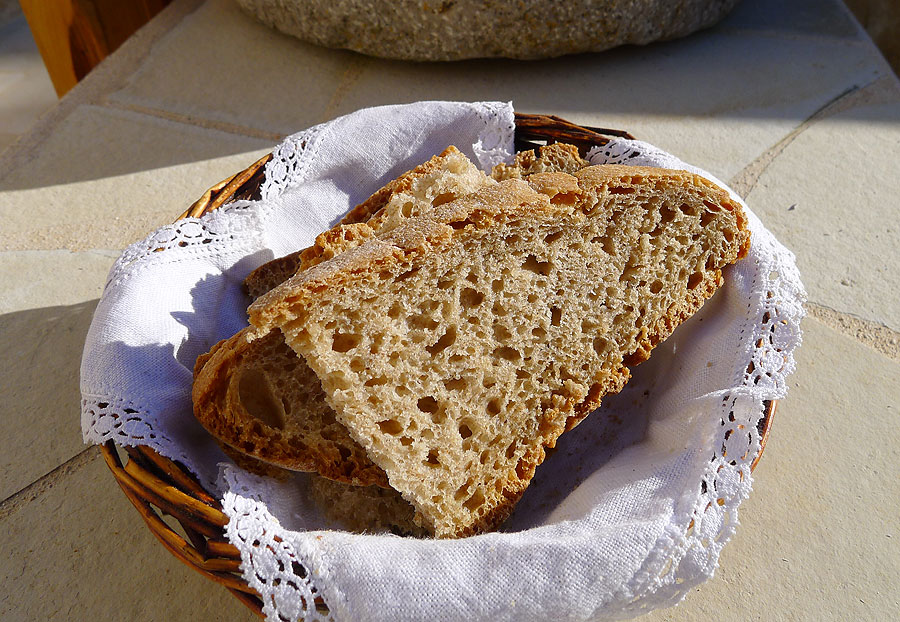 Posted at 13:57h in Gastronomía by Xescu 0 Comments
2 Likes
Share

Many of Es Torrent’s customers who order a ‘bullit de peix’ with ‘arroz a banda’ or any other hearty dish from our menu, already know what to expect. Best to come on an empty stomach and indulge in our fresh, flavourful dishes, which we elaborate with the greatest respect. But, as soon as the waiters set on the table the appetizers of the house – olives and a pot of homemade allioli – almost nobody can resist. This exquisite sauce, emblematic of our gastronomy, stands out for its intense and natural flavour. Though, much of its success must be attributed to the artisan bread that accompanies it, the ‘pan payés’ (literally, peasant bread), which is another hallmark of Ibiza.

As in many other places, the need to make bread affected the architectural landscape of the island, with the construction of wind, water and animal traction mills. Also, all of the country houses had a traditional oven that was usually accessed directly from the kitchen, since bread, except in the city, was not purchased in bakeries but rather made in homes.

The first striking aspect of pan payés is its rounded shape -when it is elongated it is called coc-, its firm and tasty texture, its durability – it can perfectly last for a whole week- and its absence of salt, which undoubtedly constitutes a true singularity. It was elaborated every seven days, with white flour, whole wheat flour or a mixture of both, along with water and yeast. In some homes they added anise seeds when making it for special occasions.

To make it, the flour is poured into a big bowl and the yeast, previously crumbled into warm water. The yeast is obtained from a chunk of dough from the previous week, which is preserved in olive oil. After kneading both ingredients, water is added until it turns into a dough that is neither too hard nor too soft. When it’s ready, the bowl is covered with a cloth and left to stand for a few hours until the dough rises. Meanwhile, the oven is heated up with firewood until its walls turn whitish, which indicates that it has reached the ideal temperature. The loaves are given a round shape and, after sweeping aside the wood and the ashes from the floor of the oven, the dough is put inside to start baking. It is traditional to mark the loaves with the sign of the cross, which remains after baking. After an hour and a half or two in the oven, it is ready.

In addition to bread, other baked goods, such as crostes, are made. These are loaves of hard bread that are left in the oven until the next day. They remain hard and crispy and after breaking them into chunks and moistening them with water, they are used to make a spectacular salad with tomato and chopped garlic, along with other ingredients such as dried fish, onions, peppers, etc. There is no great gastronomic culture without a wonderful and identifiable bread. Bon Appetite!